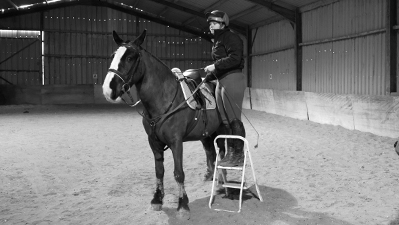 Nancy brings Cleo for her first session with Ali.

Cleo is rising four and has been lightly backed. Nancy has introduced her to whip habituation and some of the other basics of groundwork. They begin by checking what pressure Cleo is working on in terms of responsiveness to aids.

This session looks at introducing the young horse to ridden work through the transference of groundwork training to ridden aids and covers back, stop, park and go on the ground, and park, go, stop, and introducing trot under saddle.

Cleo is on about a three of pressure when asked to go back initially. She has a tendency to want to be close to Nancy and will step forward repeatedly when asked to park. Her ‘Go’ is nice and light. They test park and Cleo is good initially, but on the second attempt of Nancy moving around her, she wants to move so she can see Nancy clearly. The third attempt is markedly better with Nancy stepping to Cleo’s right, but she still wants to move herself when Nancy walks round to the right.

They walk quietly round the school testing stop and go. When Cleo is anxious in park Ali mentions that it’s important to test the stop in places where she is anxious and wait until she lets her breath out before asking her to walk on again to allow the adrenalin to lower.

Cleo slows down just before the steering goes a bit, so Nancy can focus on rhythm so that she can prevent the steering from going.

They then try a few little jogs down the long sides on the right rein. This raises Cleo’s anxiety levels again, so they return to walk, stop, go to allow her anxiety levels to lower again. On the left rein Cleo is a little more settled. They finish quietly on a really good note.

Back to Nancy & Cleo 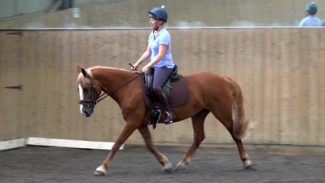 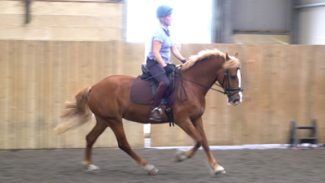 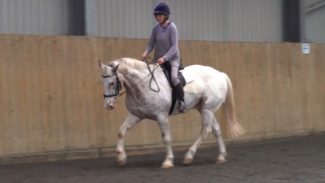 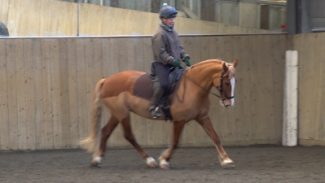 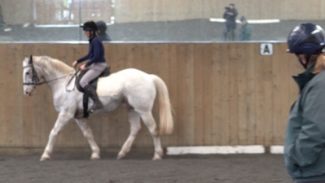