When I teach, and the pupil has got to a certain stage in their riding, I will often tell them of the movie Robin Hood – Prince Of Thieves starring Kevin Costner. In the movie Robin, played by Kevin Costner, is fighting Little John in the river with a quarter staff. Little John knocks Robin down into the water. At that moment Robin looks across to his Saracen friend asking mutely for advice to which the Saracen replies 'Get up! Move Faster!'

This usually gets a laugh and I explain that when riding, we need to have extremely good focus and be very vigilant for things starting to go wrong. Imagine we have a scale of 1 to 10. 1 is a tiny mistake, 10 is a huge unrecoverable mistake. Most riders wait far too long and the mistake gets to a 3,4,5,6 and in the end they have to make much bigger corrections.
Good riders create that state of illusion which allows them to feel the mistake at a 1 and make a correction of the equivalent size. This makes both the mistake and the correction hardly visible at all.

You can improve your ability to notice by starting to label how big the error got, in terms of a number, before you noticed it. This will help you to pay attention and begin to start feeling it happen earlier. You also want to ask yourself what changed in the horse and more importantly what changed in you. When we can distinguish better between degrees of going wrong, we can make fixes earlier and make smoother progress.

In the end, I explain that they need to focus harder, and react a little quicker. Together we play the numbers game until the pupil starts recognizing and reacting quicker.
JOIN US

WANT TO WATCH THE 'HOW' OF RIDING COURSE?

LEAVE YOUR COMMENTS BELOW

SHOVING WITH THE SEAT 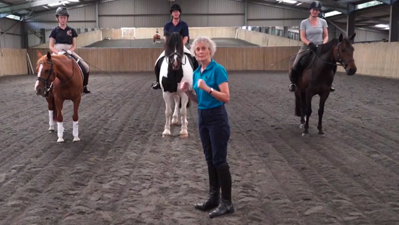 WHAT EVERYONE OUGHT TO KNOW ABOUT ‘ON THE BIT’